Australian fades at the mountain
Girls all but clean up
Men save their best for last
Mixed bag at the velodrome
Action Jackson closer to gold
Pitt into semi Fight Club
Rudic proves himself a heavyweight
Women prove the stronger sex
Veteran lifter hangs up shoes
Bayley wins, Kersten disqualified
Bates dominant in defence
Melbourne's night of nights

Athens Olympics blog
Rogge closes Athens Olympics
Anti-Americanism erupts in Iraq face-off
Croatia to meet Russia in final
Trenton out of the medals
Massamino out in quarters
Aussies miss out on beach volleyball medals
Brazil beat Spain for men's gold
Injured Cook goes down fighting
Australia to play off for bronze
Prosser, Williams still in medal hunt
Softballers to play for gold
Aussie pair through to women's semis
Aussie men through to semis
Australia needs to win playoff for gold
Prosser and Williams into quarters
All over for Thorpe and 4x100m team
Hackett and Stevens through to 1500m final
De Bruijn leads the way in 50m freestyle
Henry swims for gold tonight
Australia, US vie for top spots in pool
Thorpe cruises into 100m semi final
Wind hampers heat times
Thorpe and Hackett progress in 200m free
No-hitter win for Australia over Japan
Outside the stadium, Athens remains laidback
Lean decision could mean gold for Trenton
The calm before the storm
Stronger, faster Aussies pitching for medals
Focus on performance, not medals or records

The names, not the website, are Crikey gold
How citizen reporters get the news out first
Athens 2004, 2012, 2016 ...
Mr Ruddock, we need a proper population plan now
Gen X: The new political mood
Debunking the great Generation X myth
hacktivism: the new protest movement?
Wag the Watchdog: The Internet and the Kosovo Campaign

Public convinced of AWB illegal payments
I am blogger, hear me roar
Dr Stephen Livesey, stem cell scientist
Australians rank in global road rage study
Primary class sizes lowest ever
Sounding off against MS
Blues shine through the rain
Blues festival returns to its roots
And the web site is...

Into the Millennium
Bringing Governments Down: The 1999 Victorian Election Campaign and the Net

I'd been tinkering with blogs for about a year before starting this - including writing what I believe was the first Australian news blog on location from Athens while I was with The Age.

I've been working in the online area since the mid 90s and though I've done time in the print side of the business I don't really feel as though I've ever left the online world behind. I consider myself lucky to have been involved with this new medium from early on.

It struck me back then that online is perfect for journalism. That's taken a while to filter through to the industry. The challenges for traditional print businesses are very clear: papers are undergoing a massive cultural and economic shift, and online is critical to their future. It's incumbent on newspaper editors and executives to be across all of the relevant online issues and develop strategies to stay abreast of new reader trends and technological developments.

Amongst other things I've taught journalism at La Trobe University and RMIT in Melbourne, and at UTS in Sydney. I was instrumental in helping establish Blue Ear during 1998 and 1999; Ethan Casey and I tried a whole range of strategies that pre-dated Ohmynews in what was possibly the first example of distributed journalism on the web. It was exhilarating and exhausting and it didn't pay a cent. Given the same circumstances I'd do it all over again.

After freelancing, teaching and spending most of my twenties as a semi-professional musician I moved into academia, and from there to the world of business journalism. I spent a few years as the online editor of a number of finance and business web sites for Fairfax Business Media before moving to The Age.

From 2001 to 2005 I worked at The Age in Melbourne where I was variously editor of theage.com.au and deputy editor of sections at the newspaper. From there I moved to Sydney as editor-in-chief of NEWS.com.au, and then on to Brisbane as General Manager of APN Online.

I used to live a few minutes walk from the beach, and play the Fender Jazz with "one of the best kept secrets in Australian country music" . If you're ever in Melbourne I do recommend you check out The T-Bones.

These days I play keyboards and guitar with The Long Stand, amongst other Melbourne outfits. 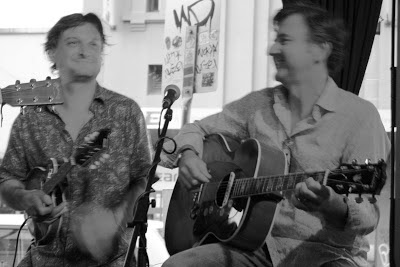