"EveryBlock filters an assortment of local news by location so you can keep track of what’s happening on your block, in your neighborhood and all over your city."

They've launched with Chicago, New York and San Francisco and presumably have much more to come.
Posted by hm at 2:38 PM No comments:

The magazine that has run some of the biggest names in Australian literature during its 128 years - Henry Lawson, Banjo Patterson, Joseph Furphy and Miles Franklin, amongst others - has published its last issue.

PBL Media CEO Ian Law said that the publication had been making a loss for a number of years and they "could see no prospect of this trend being reversed".

As might be expected, the "impact of the internet" was cited by ACP chief Scott Lorson as a factor in the decision.

That's too easy, though. Magazines - weeklies and monthlies - are actually less effected by the internet than newspapers.

I admit it. Stories like this are too compelling.

I mean, all that chopping must have been hard work ... 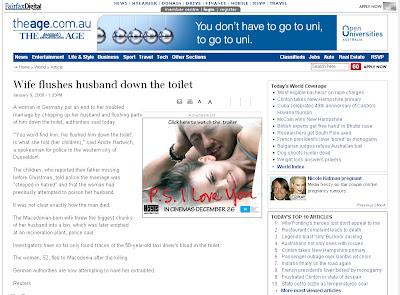 But then, looking at that page, what really distracted me from the chopfest that was going on with the news item was the MPU ad for "One of the year's best love stories" starring Academy Award winner Hilary Swank, Gerard Butler and Friends "icon" Lisa Kudrow: PS, I love you.

Ahh, the wonders of contextual advertising.
Posted by hm at 5:32 PM 3 comments:

At NYT.com The Caucus reported that "Terry McAuliffe, Mrs. Clinton’s chairman, on MSNBC attributes her apparent victory to her tearful moment yesterday: “That humanizing moment yesterday,” he says. “That did it.”"

That wasn't a tearful moment. It was pure theatre by an expert performer. Have a look.

But the "tearful moment" was reported seriously all over the place. So it worked a treat.