We launched a new site today at APN Online, which I think is going to do good things for us. Finda.com.au has its first iteration in Toowoomba, and we're planning on rolling it out to the rest of regional Queensland and Northern NSW over the coming months. 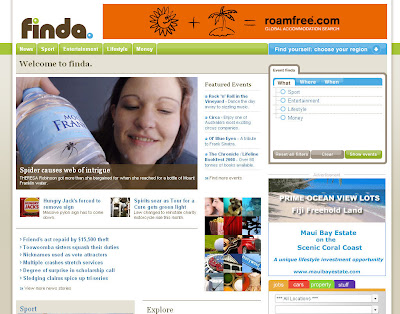 It's initially focusing on news and events. But it has a few nice features enabled by the crossover taxonomy and geo-targetting that allows news stories and diary events to be themed together under content or category types. This sort of data configuration allows a lot of flexibility in the way you can mix and mash content. 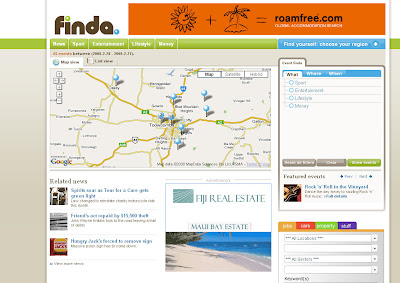 I was encouraged to see this reference in the Newspaper Next 2.0 report from the other day, because it's exactly what Finda is aiming to do :

“Looking at the possibilities that lie beyond the boundaries of traditional newspaper companies the report describes how such a ‘former newspaper company’ might look several years in the future, in the eyes of the consumers and businesses it aims to serve:”

Released yesterday the American Press Institute report "outlines a broad new vision for what newspaper companies must become if they are to survive in today's heavily disrupted media landscape. It also presents 24 case studies of new products developed using Newspaper Next principles and methods, and seven profiles of organizations that have made significant structural changes in the process of developing these products. And it examines the most promising areas for maximizing online revenue generation, with assessment tools and practical guides any newspaper can use to begin taking advantage of those opportunities."

"In Melbourne criminals have a saying: We catch and kill our own ..." 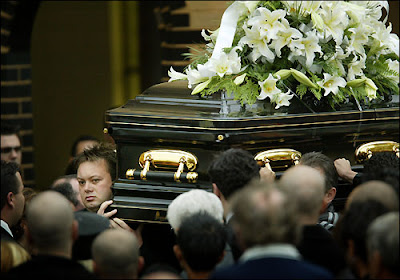 Jason South's photo of Carl Williams as a pallbearer at Andrew Veniamin's funeral
John Silvester's opening line of the feature he and I worked on together with Simon Johanson and Matt Absalom-Wong at theage.com.au in 2004 sets the scene for the story of Melbourne's gangland killings more powerfully than any of Vince Colosimo's posturing on nine's Underbelly.

Underbelly, however has a dinky little soundtrack that does nothing for the atmospherics and only works as an illustration of what a missed opportunity this show already appears to be. Can you imagine the Sopranos without the funky "Woke up this morning"? Or The Godfather without Larry Kusic and Nino Rota's famous theme?

Underbelly has been banned in Victoria, but I watched it in Brisbane last night and many Victorians will no doubt be watching it from today after downloading it from Bit Torrent sites like mininova, iso-hunt and Torrent-finder. 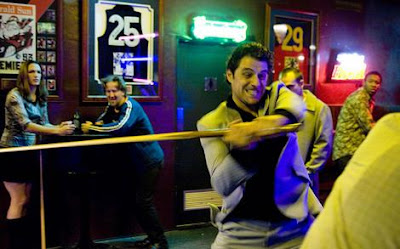 Vince Colosimo as Alphonse Gangitano in Underbelly
On a lot of levels it's a disappointing effort. The performances are quite strong but the timeframes feel too rushed. Some of the events portrayed - particularly around the murder of Greg Workman and the shooting of Alphonse Gangitano - directly reflect news reports of the time, but the sequence and lead up events are not clearly communicated to the viewer. So if you aren't already familiar with the stories on which the performances are based the storyline is confusing.

Gangitano is a good example. The guy was clearly deranged, but the producers have missed an opportunity to create a powerful figure in the tradition of deranged criminality, whether a Sonny Corleone or a Clyde Barrow. Instead we get superficial glimpses of Gangitano at home with his family contrasted with scenes of murder or mayhem that don't do much at all to expose why this guy might have acted in such a way.

It's almost as if in trying to capture the whole messy era in one (13 episode) series they've bypassed a great dramatic opportunity in favour of a quasi-documentary style. David Chase would have done this slowly across five or six series. The material warrants it. It's a pity Australian producers don't have the confidence to approach such rich material in the same way.
Posted by hm at 10:32 AM 2 comments:

Myspace and the future of social networking

... in their own words: Chris DeWolfe and Amit Kapur