This headline in a recent Adnews - "Brissie Times grows market" - caused a chuckle. Lovely spin from the Fairfax Digital guys, but the numbers don't reflect reality. 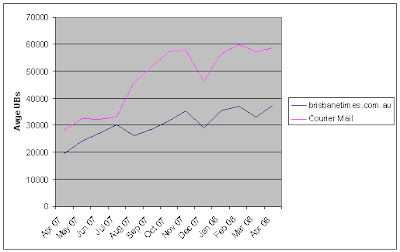 The chart above shows the 12 month growth in UBs to the Courier Mail and the Brisbane Times since the launch of the Brisbane Times. At first glance it's impressive enough - both trending up; the newcomer snapping at the heels of the incumbent which lifts its game in response.

At least that's how Adnews reported it. And of course, that's what Fairfax wanted.

Well, I'm not so sure about that. Let's look at the numbers a little more closely.

If we take average daily UBs since January 1, 2008 the figures stack up like this:

Keeping in mind that Brisbane has a population of nearly 2 million, that means on this calculation around 75,000 people a day are looking at the two news sites, and that's not taking into account any duplication between the two audiences.

In other words about 3.75% of the population is interested in "hard news and credibility".

But actually the number is a lot smaller. And the reason is that most of the audience viewing these sites actually comes from outside Queensland. Rather than growing the news audience in Brisbane, what Fairfax Digital and News Digital Media are doing very well is moving traffic from their high volume sites in Sydney and Melbourne to their Brisbane sites.

Fairfax is exceptionally good at this. But News Ltd has a slight home town advantage with the Courier Mail brand reflected in stronger local viewing numbers.

In a trade release this week announcing the success of their new product, The Vine, Pippa Leary gave something of an insight into how Fairfax Digital uses its big traffic generators to spin off new commercial products.

"We were looking at fairly aggressive growth, but were surprised to get four times that in the first three weeks," said Leary.

Leary said Fairfax Digital had done "almost nothing" in the way of marketing the site other than directing existing Fairfax Digital users to the site through cross-promo ads on the SMH and The Age websites.

And that's exactly how they've built traffic to the Brisbane Times. Here's how the state based numbers break out (this is the stuff Adnews should have looked at):

So in terms of "growing the market" the total figures mentioned above, and those used by Adnews, don't illustrate any real growth in the local online news category for Brisbane.

It is good spin, though.

(All stats from Neilsen Market Intelligence)
Posted by hm at 12:24 PM 1 comment:

More doom and gloom about the newspaper industry. The Economist ran this line back in August 2006 with a cover story titled Who Killed The Newspaper? That one got up a lot of noses in the industry, and now they're at it again:

"... although all newspapers are being buffeted by the internet, their ability to respond will probably depend on whether their audiences are national, metropolitan or local. The first category can afford to invest in distinctive international or business coverage, while the last can prosper by becoming 'more intensely local'."

Which means, of course, those metro papers in the middle are probably stuffed.

The other publication taking aim at newspapers recently has been The New Yorker.

"Until recently, newspapers were accustomed to operating as high-margin monopolies. To own the dominant, or only, newspaper in a mid-sized American city was, for many decades, a kind of license to print money. In the Internet age, however, no one has figured out how to rescue the newspaper in the United States or abroad. Newspapers have created Web sites that benefit from the growth of online advertising, but the sums are not nearly enough to replace the loss in revenue from circulation and print ads."

So, is there an alternative view? The Guardian thinks so. Or rather, according to a recent report "newspaper editors around the world remain overwhelmingly optimistic". Which of course, is not quite the same thing.

"In one of the largest surveys of the worldwide news industry, 85% of editors said they were optimistic about their newspaper's future. At the same time, a rising number predict that print and online news will both be free in the future."

Bit of a disconnect there, but what can you expect? Editors sullying themselves with commercial imperatives? Not likely.

"George Brock, president of the forum and Saturday editor at the Times, sought to explain the disparity between the results and falling circulation and squeezed advertising revenues. 'This is a survey of editorial opinion," he said. "Most pessimism is a survey of commercial opinion.'"

Well, there you have it.

It just depends who you ask, really.
Posted by hm at 2:15 PM No comments: