A round table discussion on media and politics

Participants came from a range of media, academic and political backgrounds. Many had presented the previous day at the public conference. Others, like me, were invited to the round table event for alternative perspectives. The stated goal of the US Studies Centre was to generate discussion and insights "into the nature of the ‘civic crisis’ created by the economic and technological disruption of the media industry and what it means for future governance".

James Fallows moderated the hour long discussion. It was a tough job, given the topic and the timeframe.

The discussion kicked off by acknowledging that the internet has created an "uber-platform", which has broken the previous constraints on media delivery mechanisms. As a result of this, and the difficulties faced by commercial media organisations, public broadcasting in Australia was now more important than ever.

Newspaper publishers had seen their business models destroyed by the disruption of new media technologies in recent years, and the next victims are going to be television broadcasters, particularly pay TV businesses.

The reasons given for this revolved around live sport. Live sport is "appointment viewing" on broadcast TV but IPTV will change that. The content owners of major sporting codes, eg the AFL, will be in control more than they have ever been. They will be able to generate revenue directly via, for example, paid apps, thus bypassing individual rights holders and removing key pillars for broadcasters.

Curated content, however, will still be important. A perceived key to value creation online is delivering credibility and authoratitive information where so much is unreliable.

Much of the ensuing discussion was concerned with the problems of journalism: how to maintain breadth and depth of coverage, balance and quality in reporting, newsroom resourcing, and jobs for journalists.

These are not new issues. The "future of journalism" debate was a useful one to have before 2005. The most important issues now relate to sustainability and innovation.

Either way, this round table was convened with a stated interest in exploring issues of civic crisis as it relates to media and politics. We seemed to be getting side tracked into old media thinking.

The US media industry is a different beast to ours. As, of course, is their political system. But we share a malaise in both and the compounding effects are dire.

It seems to me that whilst "civic crisis" is an extreme description that doesn't yet apply in Australia, there is a real risk. The media has a role to play, but it is not a controlling influence.

There is plenty of agreement that the disruptive influence of new digital technologies will not stop with media business models. The transformation from analogue to digital, with all its benefits has been painful. That pain is felt mainly in the loss of jobs. Something like 50% of journalism related jobs have been lost in this country since 2004.

Proportionately, these job losses do not represent a large part of the economy. Many of those media workers have relocated to other knowledge related work.

But the trend continues, and the same impact will be felt on other industries. We are already seeing it in retail; education will be hit too; all service industries can expect the same to happen to them. Deloitte's recent Digital Disruption report goes some way to quantifying the impact.

However, Deloitte does not go to the next step and detail the social and political impact of this disruption. And there's the rub.

With so many industries being affected, and so many jobs being lost in such a relatively short time, civic crisis is not only possible it's almost guaranteed.

In that scenario, the quality of information exchange as mediated by professional journalists will not be the most important concern for most people. It remains relevant, but there are other more fundamental things that need to be addressed. This is broadly an economic problem. The historical analogy is closer to the Industrial Revolution than to Gutenberg.

The internet is an "uber-platform". And ubiquitous broadband will amplify that. Media is everywhere, and virtually every business is impacted by media technologies. The one advantage that media industries have (for now) is that we were amongst the earliest affected, and if we learn from our mistakes of the past 10 years we can play a useful role in mitigating the crises that are to come.

The Public Knowledge Forum roundtable was convened by the United States Study Centre and the University of Sydney. Chatham House rules applied.
Posted by hm at 11:18 AM No comments:

Fairfax have today launched a new front page on their news sites, to coincide with the move to compact sized newspapers.

As a reminder of what they had before, here's the front page of the smh.com.au from last week: 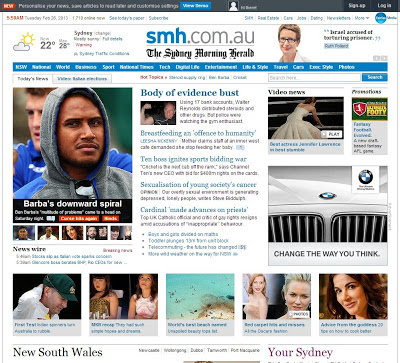 And here's the new one from today: 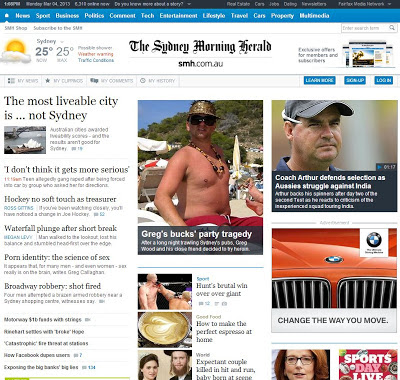 Personally, I think it's disappointing they didn't do something more adventurous. I understand that they wanted to take the sites upmarket and avoid being criticised for being "tabloid" (theage.com.au and smh.com.au have had that accusation thrown at them for years). And I get that they really, really don't want to alienate existing readers.

But they could have been more, well, interesting. They could have made this project a small statement about Fairfax's digital competency and intent.

Instead it just feels like a missed opportunity.
Posted by hm at 1:26 PM No comments: