There goes one of my favourite reasons for checking YouTube.

What's next for the big corporates as they chase down social media and other web 2.0 opportunities? Has it all peaked?
Posted by hm at 4:29 PM No comments:

While Mark Day writes about Australian newspaper editors who don't understand their web sites, the editor of the LA Times is activating his newsroom to go out and investigate the problem themselves. It's an interesting approach.

As the NYT puts it: "While visits to newspaper Web sites are increasing, they account for a small part of revenue and do not draw enough advertising to support newsroom operations."

This is the problem facing all newspapers. But rather than hiring consultants, or simply wringing their hands - though it sounds like there's been a lot of that already - the LA Times editor "is dedicating three investigative reporters and half a dozen editors to find ideas, at home and abroad, for re-engaging the reader, both in print and online."

Their sense of urgency is admirably, if a little belated: “'We realized we had to act fast or we wouldn’t have anything to act for,' said Vernon Loeb, the paper’s California investigations editor, who helped originate the idea."

So, will they publish the findings as a paper insert or a site feature?
Posted by hm at 11:31 AM No comments:

Australia's route to a new media legislative environment passed its first step this afternoon after it was approved by the Senate. Next stop the House of Represenatatives.

Opinions are divided over what level of M&A activity this will prompt. Today's Oz says most of the big players will opt to wait and see. But others have said there'll be a fast and furious frenzy of buying.

The biggest objections to the changes are about what this will mean for diversity. But even that is not a clear cut matter. Some have argued that diversity would come from fewer, rather than more, media companies.

It's report time. The third State of the News Media 2006 report has been published and lo and behold the US version has prompted an Australian one.

The Australian Press Council has just released The State of the News Print Media in Australia Report 2006.

It's about time we had a local study. It would have been nice, though, if they'd delivered it as a complete PDF file rather than just via some very rough html.

Anyway, despite some of the doomsayers, it's a surprisingly upbeat, albeit fairly thin, report:

"Terminal decline is not a description that is warranted for the Australian press, certainly not yet, given the innovative and vigorous response of newspapers to the challenges they are encountering. But the juggernaut of change is challenging everybody in the print part of the news industry."

And that's, understandably, where today's reports have taken the story. The Oz concludes that "newspapers do have a future, despite the rise - and rise - of the internet as an information source".

And some rise it is. Look at the year-on-year growth rates for the main news sites: 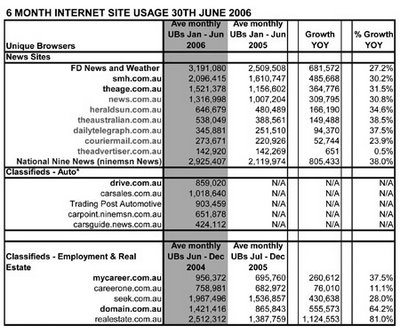 I can't help but think there's a lot of wishful thinking going on in this report. The authors are by and large working editors, with a couple of academics thrown in for good measure. There's nothing specifically wrong with that, but I just don't get the impression they are the best available sources for some of the analysis - particularly around the question of new media and the challenges it presents.

Elsewhere, Australian media organisations are conducting their own investigations into the road ahead.

Mark Day writes about a recent ABC session on the "digital future" and decides that "Just as TV did not kill cinema despite the dire predictions, the internet threat to newspapers is based more on its capacity to leach away advertising revenues than drawing away readers."

But it's not all. In the same article Day says he has been "talking to a bunch of newspaper editors about something they universally admit they don't yet fully understand: their websites."

And there lies the biggest problem for newspapers.

Some current pieces on online news and newsroom movements:

'Wash Times' does all audio on demand - The Washington Times has launched a new online feature that automatically translates all of the newspaper's staff-written content, as well as some AP content, into streamed audio and MP3 files

The New York Times' digital makeover - Martin Nisenholtz is presiding over a surge in digital revenue at the old gray lady.

Financial Times takes first major step towards a digital future - From now on all the material that appears on ft.com, email news alerts, blogs, podcasts and all other platforms is being produced by the same people who turn out the main paper.

"Video is the future for Telegraph photographers" - Newly appointed Telegraph Executive Editor (Pictures) Stuart Nicol, who is set to join the troubled newspaper group on October 16th, has told EPUK that the future of the Telegraph’s photojournalism lies in shooting video.

'Technology Is Now an Important Part of Media' - The New York Times Co.'s new futurist-in-residence predicts that a new generation of newspaper readers will soon be accustomed to reading news on a screen and won't possess an "emotional attachment" to paper.

... And I know it doesn't really fit in this category, but:

Google's Chief looks ahead - In an interview with TIME, CEO Eric Schmidt explains what's behind the company's new push for partnerships

Scott Karp identifies a particularly ominous comment in the Time interview.
Posted by hm at 3:29 PM No comments:

A couple of interesting things on citizen media:

* UGC gets sticky - Sites based on user-generated content (UGC) are seeing huge gains in usage in the UK, according to data recently released by comScore Media Metrix.

* MIT Communications forum on the emergence of citizens' media.

* Mark Glaser's Guide to Citizen Journalism
Posted by hm at 3:01 PM No comments: